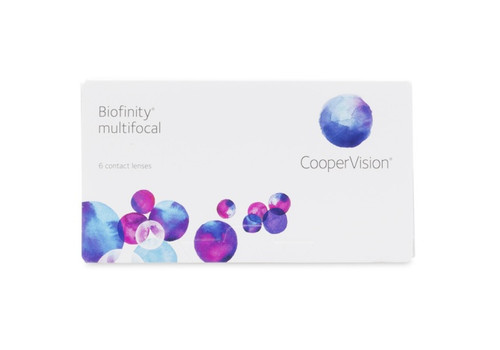 Biofinity Multifocal contact lenses are manufactured by Cooper Vision and are available as monthly lens. This multifocal lens provides correction for presbyopia by allowing the wearer to see near and far objects with everything in between.

This is achieved through what Cooper Vision call Balanced Progressive Technology that contains multiple zones of vision correction which allows your brain to select the portion of the lens to see through for that particular task. The lens is made up of 3 different zones being spherical central zone, progressive zone and spherical outer zone. The lenses come in either a D (Distance) or N (Near) lens. These letters can be found on the box of contact lenses or the prescription provided by your optometrist. The D (distance) lens will have the distance vision as the central spherical zone, so the middle of the lens will be used to see distant objects. The outer zone of the D (distance) lens will be used to focus on near objects, with the middle or progressive zone will be used to focus on everything in between such as your computer screen. The N (Near) lens will have the near portion of the lens as the central spherical zone with the outer portion being used to focus on distance objects.